If you were suddenly transported back in time about 15,000 years ago and landed in the same exact spot, what would you see?

ICE!  Nothing but ICE!

You would be in the Last Ice Age.  It would be unrecognizable, but this ice, or glacier, helped form the landscape of New England that we know and love today. See, as the glacier creeped along, it moved rocks, formed cliffs, created mounds of sand called drumlins and smoothed out flat places called glacial plains. We see these cliffs today when we go hiking in the Blue Hill reservation. The flat places are today’s farmland and residential areas. Milton Hill and Bunker Hill in Boston and many of the Boston Harbor islands are drumlins.

Eventually, this great glacier began to melt and slowly recede. As it receded, sometimes a block of ice covered by a layer of earth would remain frozen, while the ice around it melted away. When that last piece of ice finally did melt, the earth on top of it collapsed and created a hole. These holes were deep and they filled up with water. We call these kettle holes and we have two of them right here in Milton.

All of this glacial activity left us with a very hilly town! We have Great Blue Hill, Brush Hill, Buck Hill, and Chickatawbut Hill. 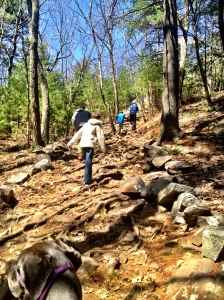 All of these hills make for a very strenuous bike ride but it’s wonderful for hiking and exploring. And the view from the top is beautiful!

Before the settlers landed on these shores, the native people who made a life here were the Massachusett people. The tribe that made their home in and around Milton were called the Neponset, and they were one of many Algonquin speaking tribes in the area.

The Neponset people moved with the seasons. In summer, they ranged all over the Blue Hills, where they did most of their hunting, but their main settlement was near the falls of the Neponset River, right where the Adams Street bridge now leads into Dorchester.  We know that area today as Milton, Lower Falls.  This was their favored spot and they called it Unquity-Quisset which meant “where the headwaters of the Neponset meet the tidewaters of the bay.” Imagine during a hot day, setting up near a beautiful river filled with fish and cool water, a perfect spot to pass the summer months. In the warm weather,  men would wear breechclouts (breechcloths), which were skins held around the waists with leather thongs.

The women would wear long deerskin dresses. During the cold weather, the women would add leather leggings under their dresses and the men would don deerskin shirts and leggings, as well as moccasins and fur caps. There would oftentimes be decorative fringe on the clothing as well as painted designs, and both men and women used paint on their faces.

These Algonquin-speaking people also farmed. They grew fields of corn and beans, and they planted and cultivated pumpkins and squashes that had been growing in the fields near the Neponset River. They burned the fields to get rid of the stumps and undergrowth and then planted their seeds in hills or rows.  In each hill of corn they buried a couple of little fish.  As the fish rotted, they served as fertilizer to nourish the growing corn. Do you know the name of this wonderfully fishy fertilizer?

They would catch the “fertilizing fish” as the fish made their way up the Neponset River in the spring, and they would catch them in weirs by the falls of the river. A weir is basically an obstruction placed in tidal water or across a river, and it is designed to trap fish. They were constructed using slanted sticks driven into the river bottom. They might look something like this….

The natives also fished used large nets over at the area of Gulliver Creek, in what is now East Milton.  If it’s hard for you to picture where this is, this might help..  Gulliver Creek

Living so close to the ocean, there were plentiful supplies of lobster, mussels, clams, and oysters, and the natives were able to gather them right from the Neponset. With all of the wonderful food from the sea and land, they ate very well.

Nasaump is a traditional Wampanoag dish that is made from dried corn, local berries, and nuts. It is boiled in water until it thickens, and is similar to a porridge or oatmeal.

Combine cornmeal, berries, crushed nuts, and the optional sweetener in a pot of water and bring to a boil. Turn down the heat to medium and cook, stirring frequently, for 15 minutes.

This sounds delicious!  What do you think?  Would YOU eat this for breakfast?  Maybe for dessert?

The Massachusett people lived in wigwams, also known as wetus (which you may remember from your class visit to Plimoth plantation).

They made pottery and clay pipes from riverbank clay, which they baked over their fires. They used arrows made of wood and bows strung with moose tendon. Their arrows were tipped with stone or bone. To defend themselves, they relied on tomahawks and bark shields.

Before the permanent settlers arrived in Massachusetts, the Native people had already encountered Europeans.  European ships had crossed the Atlantic Ocean in search of gold but many of them came here to trade for animal furs. By the early 1600’s, there was a regular flow of traders going back and forth between Europe and North America. Unfortunately, the Europeans

carried more than pretty glass beads for trade. They also carried disease, and the Native people had no resistance to this disease. Many of them died; in fact, only about 1 in 5 survived the sickness. Even the great sachem, Chickatawbut died from the disease. What was left of the Neponset people was handed over to Chickatawbut’s brother, Kitchamakin. Before the town of Milton was even settled and established, the Native population was greatly reduced.

Be a detective and look for clues to the past.  What kind of reminders do we have here in Milton to remind us of the Native people before us?  Street names, pond names, signs, markers….

Maybe if you’re lucky, one day when you’re hiking in Blue Hill you’ll find an arrowhead! But even if you don’t, it’s still fun to EXPLORE!! Send us a note and tell us about your adventures!!  askus@miltonhistoricalsociety.org

27 thoughts on “Milton Before It Was Milton”